Chop Off Their Heads 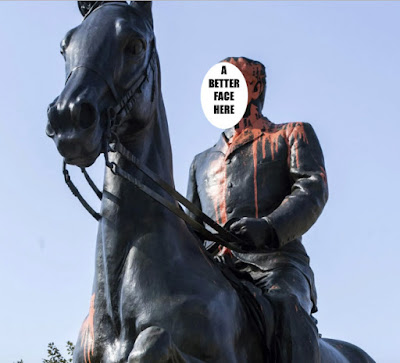 Recently I was listening to the BBC World Service covering the Yellow Vest revolutionary political movement protesting the disproportionate burden placed on low income citizens in France which, at times, became violent. The journalist asked someone in the protest why he thought the same movement hadn't caught on in the US given the economic similarities in both nations. The protester replied that when Americans think of a revolution they think of throwing tea into a harbor, and when the french think of a revolution they think about chopping off heads.

After watching what is going in in our fair city, with the mayor siphoning city funds earmarked for  'Affordable Housing' and giving it human rights violator Gil Holland in the form of forgivable loans to build upscale pricey apartments in economically depressed areas of town; and seeing the city bulldoze homeless people into the street in the middle of winter, I wonder how on earth hasn't a similar colored vest movement started here.

One movement that has gained significant ground is the removal offensive statues from public lands. After a long fought battle the Prentice statue has been removed from the York street library, and the Castleman statue could be next. But there is opposition. And aside from that, it seems to take forever for the city to agree to do anything about public art in this town; we witnessed this first hand when we offered to pay for and install the We Gon' Be Alright mural on Hill street. And after about a dozen meetings with the city we realized they were just waiting us out; never intending to rubber stamp our mural that was based on respect and equality.

It's expensive to remove statues, and even more expensive to replace them with someone else. It could take decades if at all the way our broken Mayor's office operates. We kept thinking of a solution on how to replace these offensive statues and still have the opportunity to correct history and honor someone worthy... And then Oldham County unveiled their statue of Colonel William Oldham; their county's namesake. There wasn't any images of Colonel William Oldham's face to use for the sculpture, so the sculptor, Louisvillian Matt Weir, used the face of a distant relative of William Oldham, folk musician Will Oldham. What a brilliant idea, and a pleasant Kentuckian to use as a surrogate. 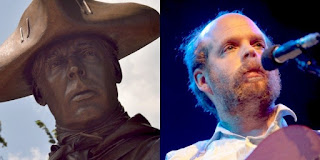 This got us thinking.. Instead of using city funds to remove these offensive statues, and even more city founds to replace them, why not just chop off their heads and for a fraction of the cost replace the heads with someone more worthy to honor? It could be a celebrated ongoing project in town. Something just "Keep Louisville Weird" enough to embrace, but would save money in a time of huge budget deficits and something the outside world might want to adopt; spreading good social justice in a creative fashion.

People ask us whose faces would we rather see swapped out on our public sculptures; And we say that isn't for us to decide.. Allowing a privileged few decide what parts of history we celebrate and what parts we ignore got us into this mess in the 1st place. It should be up to the PEOPLE to decide, not a rich or powerful few who want to write history to their benefit, and not the city who would stonewall anything that doesn't uphold their power veneer.

So this time we are not going hat-in-hand to city hall begging them to please hear our idea to brighten the city's public spaces and to get rid of statues honoring classist and racist people just so they can ignore us; but instead we will deliver a petition demanding the project happen, and we greatly appreciate your signature as well as your choice on whose faces we would be proud to see celebrated everyday.
Please sign our petition on Moveon.org here.
Posted by johnking at 1:02 PM