We Gon' Be Alright! 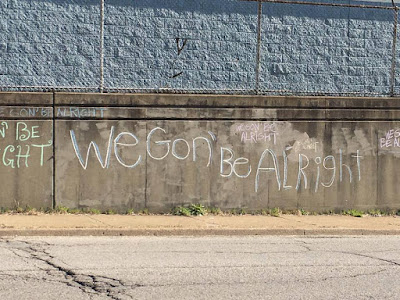 Here in our hometown, Louisville, the day Trump was elected someone spray painted "we gon' be alright" on the retaining wall on Hill street. The slogan comes from the Kendrick Lamar song 'Alright' and was adopted in 'Black Lives Matter' campaigns. on March 10th the city got whitewashed in preparation of Trump's rally in Louisville on MondayMarch 18th.  The "We Gon' Be Alright" sign on Hill Street was a beacon of hope for many of us since Trump won the election, and to make matters worse, there was a strict 'No Signs Allowed' rule during his rally, but we cannot be silenced! So we took a bucket of chalk on saturday before the rally and replaced the sign 100 times for Trump and the world to see. The city quickly washed the 100 chalk 'We Gon' Be Alright' signs down.
We are now collecting signatures to present to the city demanding an official mural be put in it's place, one that won't be silenced by the government. The petition is here, please sign and share. 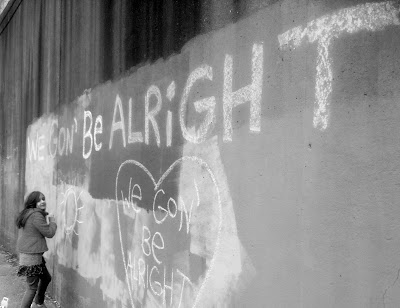